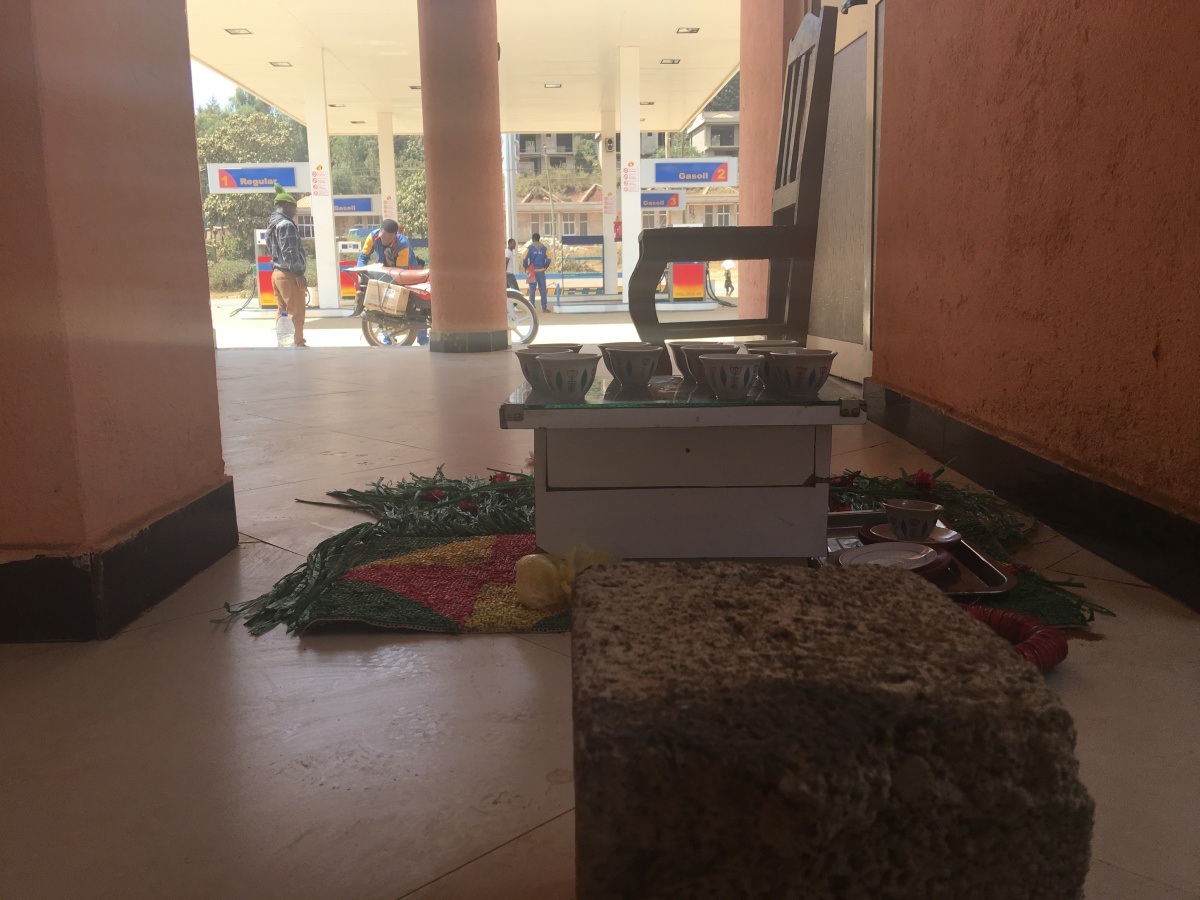 When I arrived in Yirgacheffe, I started walking around to get my bearings, and I passed by a gas station. Thinking like an American, I assumed it would also sell water and some essentials, like soap and junk food. So on my way back to the hotel, I walked up to the gas station, and while I didn’t see any kind of convenience store attached, I did see what looked like a coffee service.

“Cool,” I thought, “there’s no supplies here, but how sweet would it be to have gas station coffee in Yirgacheffe?!” I resolved that I would come back to the station for a cup of coffee before I left town. But over the next few days, I passed by and noticed there was no coffee tray. Odd, but I chalked it up to bad timing. The next day was a holiday, after all, and maybe the other times were at the wrong hour of day. I remained on the lookout.

And so today, when I left the hotel to get some lunch, I spotted the tray for the first time in a while, and decided I should strike while the charcoal’s hot. Today would be the day I try gas station coffee. I approached and asked the magic words, “bunna alleh?” The woman looked at me and after a moment of hesitation told me to sit down. She put the jebena (coffee pot) back on the charcoal stove in the back and pulled up a chair for me. I slowly began to wonder if I had misinterpreted the coffee tray. Was this for customers and passers-by, or was this just for the folks working at the gas station? Well, I was getting coffee anyway, so I figured I would just enjoy my coffee.

The coffee took a long time to boil, but when it was ready, she offered me the cup with saucer and spoon, and as I began to hold it by the lip, she pulled up a plastic seat for me to place the coffee on. The cup looked bigger than normal coffee cups I’ve seen elsewhere, and I chalked this up to a universal rule of gas stations: more coffee. I didn’t see her put the sugar in, but she obviously had. And as I drank the cup, I noticed that the coffee was ground finer than usual, so that you could taste some of the grinds.

I finished my coffee and offered her a 5-birr note, but she refused. I realized that my language barrier had worked in my favor, as she figured it was easier to give me coffee for free than to explain that she doesn’t sell coffee. I awkwardly left, still unsure of how to say thanks. I guess I’ll bring them my unroasted green before I leave town.